In the podcast, Sams explains why he believes a shift away from the current centralised financial infrastructure is inevitable, and why initiatives such as Clearmatics’ own Utility Settlement Coin and Facebook’s new Libra project are only the start of a much bigger trend.

In due course, says Sams, a more decentralised system could help address the moral hazard problem symbolised by the 2008 bailouts of big banks, as well as reducing the security risks inherent in the current infrastructure. 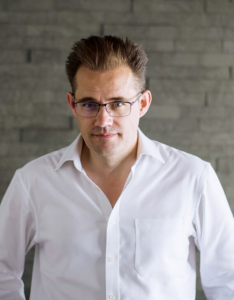 Here are some key quotes from the recording:

“USC is a digital cash settlement asset that is fully collateralised by cash at the central bank. Strictly speaking, it’s not central bank money—it’s not a direct liability of the central bank—but the structure of USC gives it a credit risk profile that’s very similar.”

“USC is designed to support a lot of the new use cases people want to deploy, such as tokenised securities and new settlement models that require a cash leg.”

“For a while, it is meant to operate as a parallel universe to the existing settlement system. We see change happening not through the disruption of existing markets, but by means of the liquidity in the legacy infrastructure eventually gravitating to the new infrastructure.”

“Given the crucial role they play in cash settlement, banks are the initiators of the USC project. But the project was never designed to be a bank-only consortium. It’s designed to include other fintech and market infrastructures and broaden access to direct participation in cash settlement.”

“After the financial crisis, there was renewed interest in liberalising access to central bank money. We’re massively in favour of this liberalisation and the USC project was designed to be fully consistent with that policy objective, and to some extent even to help achieve it.”

The future of settlement

“Intraday settlement will become more common. But what needs to change are primarily the market conventions around what happens during the lifecycle from trade to settlement. The changing settlement infrastructure will help enable those changes.”

“There will be a greater role for bilateral credit mitigation”

“It’s not a case of the shorter you make the settlement period, the better. If you had immediate settlement, you’d have to pre-fund all trades. That’s not a generalisable model for the financial markets.”

“There will be a greater role for bilateral credit mitigation. What was previously intermediated by prime brokers may happen directly between counterparts.”

“JP Morgan coin is commercial bank money, whereas the USC system is built around something collateralised by central bank money. The functions these different forms of money play are very different.”

“I expect to see more commercial bank moneys being introduced”

“I expect to see more commercial bank moneys being introduced, whether in the form of e-money or commercial bank notes in digital form. These initiatives are very consistent with what we’re trying to do.”

“The benefit of the introduction of new, tokenised commercial bank moneys will come from these things being interoperable. Even if I’m not part of the JP Morgan network, I can still pay you if I’ve got JPM coin.”

“This is a very interesting project. The technology architecture has a lot of similarities with what we’re doing.”

“One of the stated goals of Libra is to become permissionless over time. But for governance reasons, it’s not really possible to have a permissionless system built around a token that’s backed by real-world assets. You can’t fork a system like that and create two versions of Libra. So you will have to have centralisation at the protocol governance level.”

“I expect Libra to counter that there’s no dichotomy between permissioned and permissionless systems, and that there’s more than one way to define things. That will be an interesting and constructive discussion, because a lot of these concepts are currently used in ways that are not well-defined.”

“This project has definitely created a problem for the regulators and central banks. There’s going to be a challenging journey ahead to create a legal and governance structure that’s acceptable to them. But that doesn’t mean that Libra can’t do it.”

“One of the big benefits of Libra is that will bring a much larger audience to a set of topics around market infrastructure, money and credit.”

“The stated objective of Libra is to help bring money to the large section of society that’s disenfranchised by the existing financial system. There’s going to be a very interesting debate about this between the regulators and big tech. It’s too early to say what the outcome will be. But it will galvanise the regulators to ensure that innovation that serves the public interest can happen in a constructive way.”

“The idea of having a large proportion of global payments being done in the settlement asset of one issuer would be a really bad outcome. But I don’t see it happening.”

Why market infrastructure is important

“The financial market’s infrastructure has a much greater effect on society than most people realise. The stakes are very high”

“The financial market’s infrastructure has a much greater effect on society than most people realise. The stakes are very high and the general public should be more engaged with the topic. That’s because they are often not correctly represented in decisions about how the infrastructure is designed.”

The monetary system in 2039

“I think there will be a large variety of private sector issuers of money liabilities. It won’t be driven exclusively by commercial banks, as it has in the past.”

“There will be easier, cheaper, wider access to direct, peer-to-peer cash settlement, including for people who don’t have bank accounts. And it will be a much more decentralised system.”

“It’s quite possible that the tight coupling between credit creation—banks making loans and increasing the money supply—and the payments infrastructure could end. That would go a long way towards removing the risks around moral hazard and too-big-to-fail institutions.”

“I don’t think this topic gets enough attention. The technology infrastructure that’s behind a lot of today’s systems is insecure almost by design. There’s no fix to it and the risk is getting greater. And the sophistication of the attacks is increasing a lot. I hope that within twenty years we’ll have the transfer of value happening over an infrastructure that’s secure by design.”

Support New Money Review on Patreon or in cryptocurrency