Emerging markets are at the forefront of the race to develop central bank digital currencies (CBDCs), and all eyes are on China.

That’s the main conclusion of a new Bank for International Settlements (BIS) report on CBDCs, released on January 23. The report summarises the results of a survey of 66 central banks, covering 75 percent of the world’s population and nine tenths of its economic output.

The BIS, which is owned by central banks, acts for them as a coordinating body and research centre. It also hosts a number of international committees pursuing global financial stability.

In January last year, the BIS released a similar report on CBDCs, in which it concluded that the world’s central banks were so far proving reticent to introduce digital currencies, despite mounting market pressures for them to do so.

Although the BIS doesn’t say so directly in its new report, the unspoken giant in the leading pack is China, which has a 18.5 percent share of the global headcount.

Other central banks at an advanced stage of CBDC development are those in the Bahamas, the Eastern Caribbean, Sweden and Uruguay, the BIS reports.

Earlier this week the BIS said it was participating in a new working group with the central banks of Canada, England, Sweden, Switzerland, Japan and the European Central Bank to study the use cases of CBDCs.

While the likelihood of the appearance of a general purpose CBDC has increased since the BIS published its last survey, the chances for the issuance of a wholesale CBDC have dropped, the survey results indicate.

A wholesale CBDC would be restricted to a limited group of users, rather than being free to access. It would typically be designed to improve the process for the settlement of wholesale transactions, like those in the interbank or securities markets.

There are private sector initiatives to introduce wholesale digital currencies for settlement purposes: one, called the Utility Settlement Coin, is run by a consortium of financial services firms. 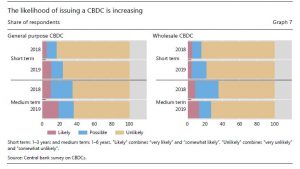 Why emerging markets are in the lead

The reason emerging markets are in the forefront of CBDC development is that these countries have greater incentives to bring in new digital forms of money, says the BIS.

“Emerging market economies (EMEs) have generally stronger motivations than advanced economies to work on general purpose CBDCs (which can act as a substitute or complement to bank notes),” the BIS said in its report.

To issue a CBDC, a central bank must also have the necessary legal authority, says the BIS. This can represent a challenge, given that most existing central bank mandates predate many forms of electronic money.

However, says the BIS, about a quarter of the central banks it surveyed either have, or will soon have, the legal authority to bring in CBDCs.

According to local media in China, a new password law, introduced on January 1, had the specific objective of providing a legal basis for a future digital version of the renminbi, China’s currency.

In a recent Chinese language statement, the country’s central bank, the People’s Bank of China, said the design principles, standards, functions and testing of its new digital currency had almost been completed.

Some observers believe the introduction of a Chinese CBDC could encourage broader worldwide use of the renminbi, in direct competition with the US dollar, the dominant global currency since 1945. Up to now, China has restricted international use of its currency.

However, recent global events have hinted at an intensifying competition between the two superpowers for control of the world’s informational and financial infrastructure.

No cryptocurrency for central banks—except one

The BIS also asked the 66 central banks participating in the survey about their use of cryptocurrencies like bitcoin, which the BIS defines as unbacked, decentralised digital tokens without an issuer.

The BIS also asked survey respondents about ‘stablecoins’, private digital currencies with an identifiable issuer and usually representing a claim on an underlying fiat currency asset.

However, in contrast to cryptocurrencies, almost all the developed market central banks participating in the survey are now studying the impact on monetary and financial stability of stablecoins, the BIS reports.

The heightened central bank interest in stablecoins is undoubtedly linked to Facebook’s plans, announced last year, to introduce its own digital currency, tied to the value of a basket of fiat currencies.