A three-decade global push to tighten anti-money-laundering (AML) rules appears to be running out of road.

That’s one conclusion to be drawn from the latest Bank for International Settlements (BIS) quarterly report, which shows a decline in the number of bilateral banking relationships that support cross-border money transfers.

This decline could help push payments activity out of the control of governments, regulators and tax authorities, the BIS is warning.

The BIS is owned by 62 central banks and acts as a forum for central bank research, discussion and policy analysis.

In its quarterly report, a special issue devoted to payments, the BIS said that payment systems are at the forefront of financial innovation.

“Payment systems are vital to the functioning of the economy,” the BIS’s general manager, Agustín Carstens, said in the introduction to the report.

“Safe and efficient transfers underpin the purchase and sale of goods, services and financial instruments. Indeed, a pre-condition for engaging in transactions is trust that payments will be executed.”

According to the BIS, technological change is leading to some notable improvements, such as the rise of fast domestic payments systems in many economies.

However, one area where progress is so far eluding policymakers is the stubbornly high cost of cross-border, person-to-person money transfers.

“Cross-border payments remain slow, expensive and opaque, especially retail payments such as remittances,” the BIS said in its report.

The BIS reminded readers that in 2011 the G20 had made a commitment to reduce the cost of remittances to 5 percent or less by 2014. However, national governments have failed to achieve this target.

“On average [remittance] costs remain around 6.8 percent. It is also significantly more expensive to remit money to certain regions. For example, the costs of remittances to Sub-Saharan Africa have remained around 9 percent for the last two years,” the BIS noted.

One reason for the lack of progress in this area could be a decline in correspondent banking relationships, suggested the BIS, which devoted a paper to the topic in its report.

These relationships, which expanded worldwide in the late 1800s with advances in communications, play a pivotal role in supporting global commerce.

“The bulk of payments flows through correspondent banks that operate a vast network of bank relationships,” the BIS said.

However, researchers at the BIS have calculated that the number of active correspondent banks worldwide fell by 20 percent between 2011 and 2018, even as the value and volumes of cross-border payments increased.

The decline in correspondent banks 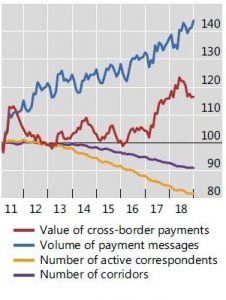 The decline was particular acute in countries where governance and controls on illicit financing were poor, the BIS said.

In their paper, BIS researchers Tara Rice, Goetz von Peter and Codruta Boar said that the thinning out of bilateral correspondent channels likely reflects dampened risk appetite amongst banks since the financial crisis.

However, they added, banks have also cited concerns about the cost of compliance with tightening regulations, such as those intended to combat money laundering and the financing of terrorism, as a reason for cutting back on correspondent links.

In recent years the US government has levied a series of multi-billion-dollar fines on European banks it says have failed to comply with its global sanctions regime. Banks failing to follow US rules face losing the ability to continue to do business in US dollars.

However, if it is leading to a loss of cross-border payment capacity, the tightening compliance regime risks producing the opposite result to that intended.

This is because it may be pushing users towards other, less regulated ways of making payments, the BIS suggested in its report.

“The continuing decline in the number of active correspondents around the world could adversely affect the integrity of the global financial system,” said Rice, von Peter and Boar.

“If banks are not providing these critical cross-border financial services, users may resort to unregulated and potentially unsafe ‘shadow payments’,” they said.

Rice, von Peter and Boar cited the rising use of large-denomination US dollar banknotes and bitcoin as evidence of the increase in shadow payments.

“Nearly 80 percent of $100 bills are held overseas, more than twice the amount in circulation abroad in 1980,” they said.

“Economic and political instability contribute to this demand. Indeed, shipments of $100 bills are greater to jurisdictions where the perceived corruption index is higher,” they said.

They cited recent estimates that around $76bn of illegal activities per year involve bitcoin and that 97 percent of direct bitcoin payments from identifiable criminal sources have been received by unregulated cryptocurrency exchanges.

However, blockchain analysis company Chainalysis believes that illicit financial activity involving cryptocurrency is somewhat less of a problem than the BIS suggests in its quarterly report.

And the firm said that $2.8bn of bitcoin was sent by criminals to cryptocurrency exchanges in 2019. However, this total was up sharply from $1bn a year earlier.

Click here for a full list of episodes of the New Money Review podcast: the future of money in 30 minutes