A fierce debate over the optimal size of bitcoin blocks may have led to a schism amongst early adopters of the cryptocurrency. But the more efficient usage of block space across the bitcoin network has recently led to a substantial decrease in transaction fees, raising hopes that the network’s key selling points of trustlessness and decentralisation can be maintained.

Since the cryptocurrency’s inception in 2009, many of those involved in the bitcoin network have been involved in a fight over its future scalability. A one megabyte (1MB) limit on the size of an individual block of data, coded into the system in 2010 by bitcoin’s pseudonymous creator, Satoshi Nakamoto, leads to inevitable trade-offs.

The 1MB limit has the effect of limiting the bitcoin network’s throughput to around seven transactions per second worldwide, limiting the currency’s potential use as a global payments network.

According to critics of the block size limit, this artificial constraint undermines the currency’s original aim, set out in Nakamoto’s 2008 white paper, of functioning as a “peer-to-peer version of electronic cash”, and needs reassessment.

By comparison, the Visa payments network has a theoretical maximum capacity of 56,000 transactions per second, 8,000 times higher than bitcoin’s maximum payment throughput.

But opponents of a block size increase point out the importance of ensuring the decentralisation of the bitcoin network. Limiting the block capacity allows anyone with a laptop to run a full bitcoin node and helps ensure the fact that bitcoin’s full transaction history can be shared amongst many peers.

By the latest count bitcoin’s blockchain is maintained by over 10,000 nodes worldwide, in 102 countries, including Iran, the recent target of US-orchestrated financial sanctions. Bitcoin’s extraterritorial reach makes it very difficult for any single government or group of governments to censor or control.

And, says this camp in the scaling debate, the physical constraints on bitcoin’s transaction throughput are better addressed by building a parallel, off-blockchain transaction system, such as the Lightning network. Bitcoin-denominated transactions on Lightning are time-stamped periodically into the main bitcoin blockchain.

Unable to gain sufficient support internally for an increase in the bitcoin block size, a number of early bitcoin advocates, including Gavin Andresen, Mike Hearn and Roger Ver have split from the main network. Ver now promotes bitcoin cash (BCH) as “Satoshi’s original vision” in an attempt to distinguish it from traditional bitcoin (BTC).

While bitcoin’s price has now fallen around 60% from its December peak, the average fee per bitcoin transaction, at just over a dollar, has fallen by 98% from its high

BCH forked from BTC in August 2017 and has since increased its block size to 32MB in an attempt to promote cheaper transactions. Having reached a valuation of as much as 50% of bitcoin’s market price in early November 2017, a unit of BCH now trades at around 14% of the price of a unit of BTC.

Critics of traditional bitcoin’s 1MB block size limit point to a sharp increase in the cryptocurrency’s average transaction fee during 2017 as further evidence of dysfunctionality in the network.

According to data from Coinmetrics, the average fee necessary for miners to print a bitcoin transaction into the blockchain rose from $0.33 at the start of 2017 to a peak of over $60 on December 22, shortly after bitcoin hit its price peak of nearly $20,000 per coin.

At $60 a transaction, some entrepreneurs’ early vision of bitcoin as a future means for paying for coffee in Starbucks were surely dashed.

However, while bitcoin’s price has now fallen around 60% from its December peak, the average fee for a bitcoin transaction, at just over a dollar, has collapsed by 98% in six months. 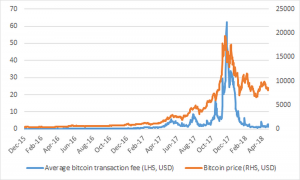 A decline in the number of bitcoin transactions from over 400,000 per day in December to around 200,000 per day currently is likely to have helped cut fees.

But efficiency gains have also undoubtedly played a part. One factor is the adoption by an increasing number of exchanges and wallet providers of a protocol upgrade called Segregated Witness (or “Segwit”). Segwit, introduced in August 2017, allows for the more efficient use of block space, helping reduce the network’s congestion.

According to data provider p2sh.info, the share of all bitcoin transactions using Segwit has risen from 9% at the beginning of 2018 to 36% on 22 May. While they represent more than a third of trades by number, Segwit transactions currently pay only 16% of the bitcoin network’s fees, indicating the greater efficiency of this transaction mode.

According to a recent blog published by Coinmetrics, another factor leading to the fall in average bitcoin transaction fees during 2018 may be the increasing exploitation by users of bitcoin’s pre-programmed flexibility in managing payments.

For example, a cryptocurrency exchange could pay out bitcoin to tens or hundreds of recipients via a single transaction, rather than recording a separate transaction (and paying a separate fee) for the payment to each recipient, as is common in the traditional banking system.

Or an owner of bitcoin with holdings spread out across separate wallets and bitcoin addresses could consolidate them into a single address using multiple inputs to a single transaction.

The potential financial benefit of batching inputs and outputs is clear, since bitcoin wallet providers typically charge for transactions in satoshis (hundred millionths of a bitcoin) per byte.

While not all bitcoin wallet providers allow their clients to batch payments in this way, more and more cryptocurrency exchanges are now optimising their bitcoin payments through batching, Coinmetrics says.

“The industrial players appear to be taking their role as stewards of the scarce block space more seriously. This is a significant boon to the network, and a non-trivial development in its history”

“The campaign to get exchanges to batch appears to have persuaded Bitfinex, Binance, and Shapeshift to do so,” Coinmetrics says.

“Coinbase/GDAX have stated their intention to begin batching, although they haven’t managed to integrate it yet. As far as we can tell, Gemini hasn’t mentioned batching, although we have some mixed evidence that they may have begun recently.” 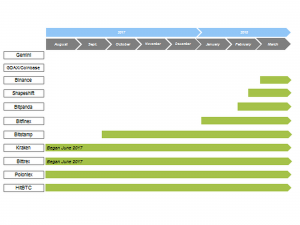 Coinmetrics sees the combined effect of Segwit and batching as positive for the long-term ability of the bitcoin network to maintain its decentralised status.

“The industrial players appear to be taking their role as stewards of the scarce block space more seriously. This is a significant boon to the network, and a non-trivial development in its history,” Coinmetrics says.

“If a culture of parsimony can be encouraged, bitcoin will be able to compress more data into its block space and everyday users will continue to be able to run nodes for the foreseeable future.”