This is the original branch of a chain of cafes that’s been in the news for having suffered a series of financial problems, including the possibility of fraud by insiders. Business is booming, nonetheless, and there’s a queue of people waiting for a table. 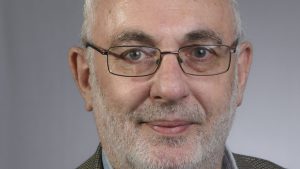 A management consultant, Birch is also an expert in payments, technology, digital identity and money—and an author.

The central thesis of his recent book, “Before Babylon, Beyond Bitcoin”, is that we are entering a period of great experimentation in money.

In future, he predicts, money will be anything to which we and our communities—whether physical or virtual—ascribe value.

That could mean we all end up carrying around in our mobile phone-based digital wallets an assortment of national fiat currencies, cryptocurrencies, private digital money and near-money like loyalty points.

I start by asking Birch what there is in common between the payments business—a booming area, full of financial technology (‘fintech’) start-ups—and banking, a sector that’s been subject to intrusive regulation since the financial crisis.

“Really, there’s no reason why credit provision, which is a financial transfer that takes place over time, and payment, which is a transfer in space, should not be separated,” says Birch.

He tells me that regulators hinted as long ago as the early 1990s that these two functions—payments and credit-based banking—might eventually diverge.

Indeed it’s unlikely that the many fintech firms now itching to get their hands on payments would want the burden of regulatory compliance that faces traditional financial institutions, Birch explains.

“Google recently got a payment institution licence in Luxembourg,” he says. “I’d be stunned if they asked for a banking licence as well.”

In Europe, the opening up of payments to technology firms has been helped by two ground-breaking regulations in the form of the Payment Services Directives of 2007 and 2015 (called PSD 1 and PSD 2).

The objective of the two directives is to increase competition, speed up payments and, in particular, to allow participation in payments to non-banks, who have jumped at the opportunity.

Birch has some reservations about the trend towards so-called open banking.

First, he points out that the promised exploitation by technology firms of bank-owned client transaction data is taking some time: PSD2 leaves open the details of the application programming interfaces (APIs) that third parties will use to connect with banks.

This means that fintech start-ups need to do their coding work to integrate with each bank separately.

But are we risking turning banks into mere data pipes for the likes of Google and Facebook?

For anyone concerned about the monopoly power of large, data-driven corporations, it’s a worry.

“Forcing banks to provide open interfaces to tech firms is half a good idea,” Birch tells me.

The missing half is reciprocity, he says. Tech firms don’t have to give anything back.

Birch says he can’t pass a moral judgement on this trend—but he adds that others may wish to worry about the rise of monopoly capitalists who are no friends of freedom. I sense his tongue is wedged somewhere in his cheek.

“Ultimately, payments are about how you get client data”

He explains that payment across platforms like WeChat and Alipay cuts out a whole layer of intermediaries, such as those involved when we pay with our credit or debit cards in Europe or the US.

But the result is that the banks also lose control of their most valuable resource—client payment data.

“In China, WeChat and Alipay have now taken over the interface with the customers,” Birch says.

“It’s not the fact that the banks are losing the transaction-based revenue from client payments. That is a low-margin business anyway. It’s that they are losing the data and have no idea what their clients are doing,” he says.

“Ultimately, payments are about how you get that data,” Birch says.

The exclusion of banks from payments is happening in other countries, too.

I ask Birch how the M-Pesa mobile money of Eastern Africa—launched in 2007 by Vodafone’s African arm and Safaricom, the largest mobile network operators in Kenya and Tanzania—took hold. Birch’s consultancy firm, Consult Hyperion, wrote the pilot project for the new currency.

“The reason M-Pesa took off is that there was a regulatory window for it to do so. The local central banks allowed it to scale,” says Birch.

“In Nigeria or India, where a similar scheme could have worked, the banks and the central banks didn’t want to allow competitors into payments,” he tells me.

India, meantime, has gone down the path of allowing social network operators—notably WhatsApp—to enter payments. But payments then run on a banking ‘rail’, to use the industry jargon.

“If payments were pre-funded, we could have global real-time payments”

In the US, banks long resisted any shift away from a lengthy settlement period for payments, motivated by the fees they could earn from late payments and overdrafts. However, the US also introduced a new faster payments scheme in 2017, apparently also in response to the potential disruption threat from tech firms.

I ask Birch how far we are from a global payment system that involves near-instantaneous settlement.

It comes back to the continuing lack of a separation—on a global scale—between credit and payments, says Birch.

“If payments were pre-funded—in other words, if there were no credit risk—we couldn’t have any obstacles to a global real-time payments system,” Birch says.

“But then it would be bitcoin,” he adds with a smile.

Birch and I take a break from discussing payments technology to muse over the tortuous progress of Brexit.

Birch suggests that he may respond to the UK’s exit from the EU by taking the disintegration trend a step further. He tells me he may launch Wessexcoin, a digital currency for one of the most successful early Anglo-Saxon kingdoms.

He suggests that regional currencies backed by regional tax revenues may be the future. Again, I can’t tell if he is joking.

But, compared with a few years ago, the future break-up of the UK no longer seems an outlandish suggestion. We wonder why investors in government bonds are not factoring in such tail risks.

“The big problem is identity”

As our meeting approaches its end, I ask Birch what is the greatest remaining inefficiency in payments.

“The big problem is identity,” he replies instantly. “Payments are easy if you know who everyone is.”

“If I walked into Patisserie Valerie and they knew who I was—not necessarily ‘Dave Birch’, but ‘person 123’, for example—they could just send a message to the bank, the Bank of England, whoever, saying ‘transfer the money’,” Birch explains.

“Payments only get super-complicated when you don’t know who the counterparties are,” he says.

Birch says he hopes Brexit will reinvigorate demands for the introduction of a national identity scheme in the UK, a project he’s been supporting for years. He says that future government entitlement services could then easily be run on smartphones.

We head out of the café into a dark London evening. Later, the newswires carry the story that Patisserie Valerie has been placed into administration, with all its branches to be shuttered pending a company reorganisation.

The Old Compton Street branch, the original café in a chain that overexpanded and ran into financial problems, will not reopen in the morning.

As if anticipating the risk of closure, Birch tells me the next day that he had tipped our waitress in cash, instead of using a payments card or his phone. Paying the tip digitally would have led to the money being frozen by the company’s administrators.

Technological advances are shaking up the world of payments. But we’re likely to be using a variety of moneys—and transaction methods—for some time yet.