FATF was established in 1989 by the G7 countries to address a perceived increase in global money laundering. Its list of members has expanded from the founders (Canada, France, Germany, Italy, Japan, the UK and the US) to include 36 national governments.

The US currently acts as president of FATF, where its one-year term expires on June 30 2019.

“I commend efforts to address the growing misuse of cryptocurrencies”

In a statement issued by the US Treasury to mark the issuance of the new FATF initiative, Steven Mnuchin, secretary of the Treasury, cited the use of cryptocurrencies like bitcoin as a particular concern.

“One of the most valuable contributions of this plenary is the regulation of all virtual assets, especially cryptocurrencies,” said Mnuchin.

“I commend efforts by the FATF to address the growing misuse of cryptocurrencies and other virtual assets by money launderers, terrorist financiers, and other illicit actors.”

SWIFT is an encrypted messaging network that helps financial institutions transmit information to each other securely. It acts as the backbone of the international money transfer system. The banks participating in the SWIFT network moved quickly to toe the US line.

A focus on intermediaries

Virtual assets, says FATF, are a digital representation of value that can be digitally traded or transferred, and can be used for payment or investment purposes.

Some cryptocurrency networks, like bitcoin, have no concept of accounts or account holders. Instead, bitcoins ‘exist’ in the network history, called a blockchain, merely as the unspent outputs of previous transactions.

Each bitcoin is therefore linked by a series of transactions to its origin as a newly minted (or ‘mined’) coin.

The net effect of FATF’s new rules will be to force cryptocurrency exchanges to pass information about their users to each other when conducting transfers.

FATF says that this user information should also be shared with law enforcement bodies, on request.

While the FATF rules are not binding, the US Treasury Secretary made it clear that he expects other countries to comply with them.

“The United States calls on all nations to join us in ensuring the FATF’s standards are implemented globally, and standing together against those who threaten the security of the international financial system,” said Mnuchin.

In the past, the US government has been able to compel financial institutions from other countries to follow its sanctions regime, levying heavy fines on those seen as unwilling to toe the line.

In issuing its new guidance, FATF ignored warnings from across the cryptoasset industry that the new rules won’t work.

Chainalysis, for example, a data analysis company with strong ties to law enforcement agencies, said earlier this year that it simply isn’t possible to identify the two people at the ends of a transfer in virtual assets.

“Requiring a transmission of information identifying the parties is not feasible”

“Virtual assets are designed to move value without the need to identify the participants in a transaction,” the firm’s co-founder, Jonathan Levin, said in an April public letter to FATF.

“In fact, in most circumstances, VASPs are unable to tell if a beneficiary is using a VASP or their own personal wallet in any given transaction. Therefore, requiring a transmission of information identifying the parties is not feasible,” Chainalysis said.

The requirement to obtain and hold information about originators and beneficiaries “appears to presuppose that an originating VASP has access to other information on the beneficiary apart from the wallet address, which it does not,” GDF said.

It also warned that cryptoasset users can easily sidestep the FATF constraints on intermediaries.

“This requirement can easily be circumvented by interposing peer-to-peer (“P2P”) transfers or non-custodial wallets, which cannot be stopped,” GDF said.

A custodial wallet for virtual assets like bitcoin is operated by a trusted third party, like an exchange, which would have knowledge of the wallet owner’s identity, as well as control over the private keys that allow the virtual asset to be transferred.

However, non-custodial wallets allow users to control their own private keys.

In its comment letter, the GDF provided an illustration showing the central difference between a bank account and a bitcoin address.

By contrast, said GDF, a bitcoin address is simply a randomly generated selection of letters and numbers, with no information tying the address to a particular identity or institution.

A bitcoin owner can generate as many addresses as he/she wants from the same pair of cryptographic keys, without cost.

Those focused on privacy recommend using a single bitcoin address only once: again, this is a departure from the idea of a bank account that’s tied to a single identity. 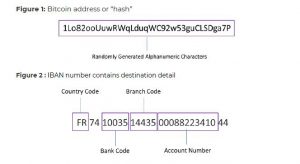 Driving financial activity to the edge

The net effect of the new FATF rules is likely to be counterproductive for those trying to tighten the sanctions regime, say some observers.

“For example, if it only pertains to transfers directly to other VASPs, then exchanges and custodians may simply require all transfers out to go to a client’s personal wallet addresses. In this case it could spur the growth in usage of crypto wallets, which is a good thing,” said Nwosu.

Asked whether FATF’s approach could severely hinder cryptocurrency exchanges in their work with clients, Nwosu was equivocal.

“I’m not sure it’s bad for exchanges,” he said.

“It might mean slightly increased hassle for customers, with a few extra steps needed for them to transfer between exchanges,” he said.

“But, who knows, some inventive wallet developers may come up with additional features to help reduce or eliminate the increased operational overhead incurred by the end consumer,” he said.

Adam Ficsor, the creator of Wasabi, a non-custodial bitcoin wallet, was scathing about FATF’s approach.

Ficsor warned that the FATF rules do little to protect users of cryptocurrency against their primary risk—having their private keys stolen. At least $15bn in cryptocurrencies have been stolen from custodial wallets at exchanges or other central storage venues since 2013, according to one estimate.

While FATF’s approach could benefit businesses like his, said Ficsor, it did not benefit cryptocurrency users overall.

“Making custodial services’ job unreasonably hard in the wrong way is good for non-custodial businesses, like ours, but I won’t cheer just because it benefits me,” he told New Money Review.

Support New Money Review on Patreon or in cryptocurrency